Apologies for not posting anything earlier but as you can imagine, dear reader, it has been a hectic week involving remembering to drive on the 'wrong' side of the road.  Finding our way around when not being able to pronounce some of the place names let alone work out what road we are on and above all getting into the goove.

We left Potton on time to a fantastic send off.  I'm still not sure whether this was just people being nice and supportive or everyone making sure Sarah and I actually did leave.  We had a fantastic convoy made up of a whole raft of classics from Carl Sturges' Morris Traveller and Paul Pibworth's borrowed Morris Minor to Terry Woods and his stolen MG and Councillor Adam Zerny no less in a TVR.  Paul Harris and Graham Bold were our Harley Davdson contingent who ensured that we were not delayed on our way to the M11.

Paul led the way while Graham was our outrider and even stopping traffic at roundabouts!!  Once we got to Dover we picked up a Morris Minor Panda car as our escort and we were led into the port to board an early ferry to take us off to France.  Watch the video for highlights of the send-off 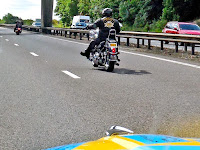 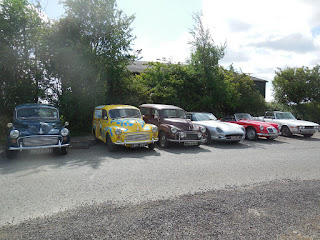 We arrived at Dover and managed to get an earlier ferry which got us into Calais at around 4pm (our time +1).  Whilst on the ferry we completed our youngest daughter, Rachel's, first challenge which was to take a picture of all three of us.  This was fairly simple and therefore lulled us into a false sense of security regarding the other challenges Rachel had prepared.

We managed to get onto the road to Riems without too many problems and so started on our journey proper.  Sarah drove the first stint and Albert was a trooper easily maintaining a steady 55mph which mean we ate up the miles. 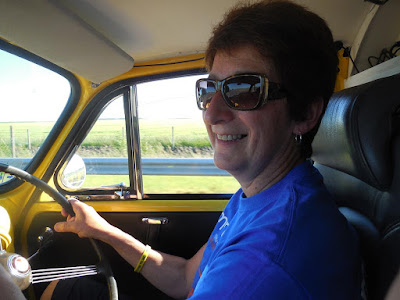 Because of the earlier ferry we actually passed Riems and stopped for the night in a secluded rest area just south of Troyes.  Out came the tent and our first night was spent under canvas. 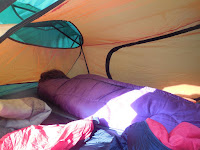 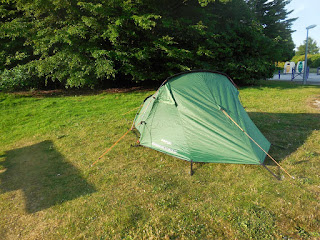 The next morning we were ready to have breakfast only to discover I had forgotten to pack the cutlery (I remembered everything else!) so we packed away the tent and got ready to move on just as the local gendarmes popped by to see what was occurring as we think someone may have reported our camping in the rest area (bar stewards!) anyway nothing was said and we were on the road again.

The drive into Bern was uneventful and we made good time arriving around 6pm settling into our hotel before going out for a well earned meal.  The next day saw us leave Bern for Milan which meant crossing the Alps.  Sarah was driving and seemed to thoroughly enjoy the experience even when we had to drop into second and also pull in to let the growing queue behind us pass.  We used the in car video to record this and a nice little programme I downloaded to create a video summary.  I hope you like it.


After successfully crossing the first of our mountain ranges we dropped down into the warmer and drier Italy and into Milan for early evening shower and a meal.

The next day was spent exploring Milan and we went to all the main sights.  The Duomo (main Cathedral) is stunning.  In the square we were accosted by a couple of chancers who gave us a couple of friendship bands then promptly stiffed us for 5 Euros for some 'arty' photos.  Wasn't too upset as the selfies just weren't happening. 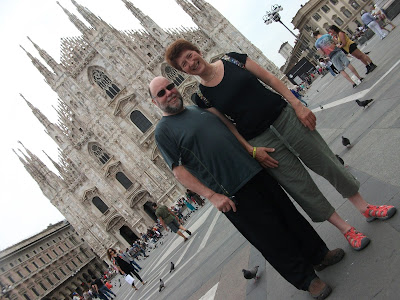 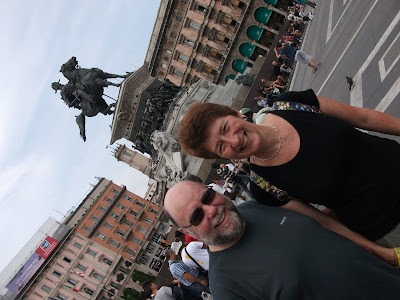 From the Duomo we walked through the Galleria Vittorio Emanuele (posh shops) to La Scala,  The building from the outside is quite unimpressive but the inside is amazing and with all the levels and huge stage the building appears to be a tardis! We managed to get a glimpse of the rehearsal for that night's opera, Carmen.  Unfortunately tickets were all sold out but seeing the rehearsal made up for that.

From La Scala we made our way down to the church of Santa Maria delle Grazie where Leonard's Last Supper is painted on the wall of the rectory.  We didn't get to see this as tickets were all sold out and bookings were being taken for 2 weeks time and since coming back at this time is not an option we didn't get to see this. 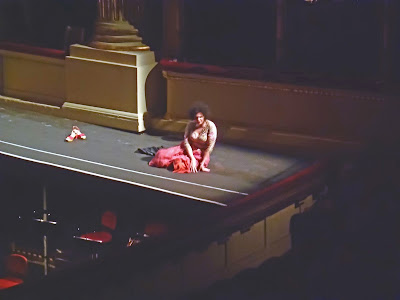 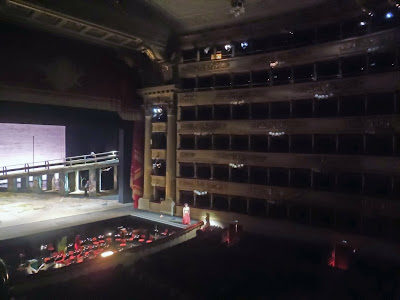 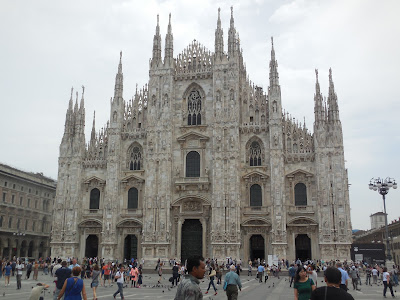 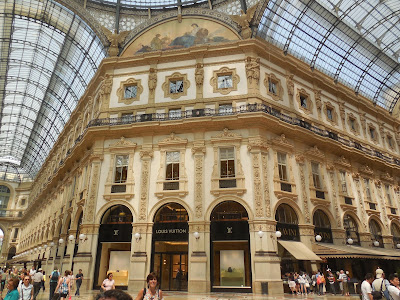 Also while in Milan we also had to deal with Rachel's second challenge which was to find the vertical forest.  This is two apartment blocks which were designed by Stefano Boeri to have trees on every balcony.  I won't bore you with the reason for this but if you are really interested you can find more information here


Day 5 into our journey sees us drive from Milan to Venice.  Nothing much to note about the drive except the scenery was stunning and Albert was keeping up the pace.  We arrived in Venice to park up and walk the 100 yards from the car park to our hotel.  After checking in we took a stroll around exploring before we had a nice meal sitting outside overlooking one of the canals where we could watch the world go by.

The next day (Thursday for those who have lost track) saw us get up ready to face the day, explore Venice and complete Rachel's third challenge.  Venice is an amazing city and well worth visiting we walked miles through little alley ways and across small and large bridges.  We also took the water bus to the Lido and saw Venice from the Grand Canal.  Another great meal ended up a perfect day. 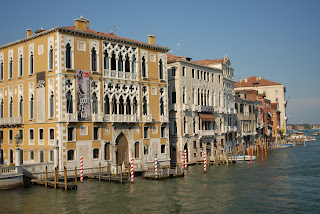 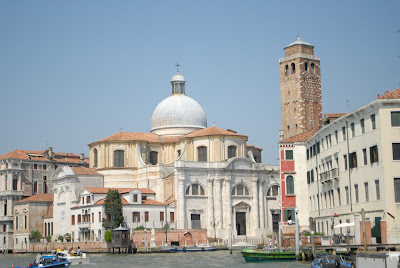 Rachel's third challenge was for us to find the Libraria Acqua Alta.  After some serious searching, getting lost (but not too lost) and persevering with the fact that the names on the map didn't match the names on the alley walls we (well Sarah) managed to find this amazing shop.  The second half to the challenge of finding this place was to get a photo with the manager/owner who was absolutely bladdered but then it's not surprising as managing a bookshop like this would drive anyone to drink. 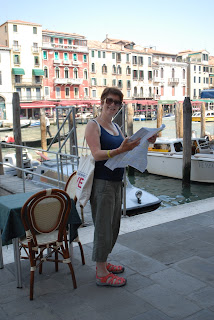 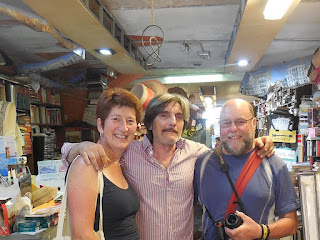 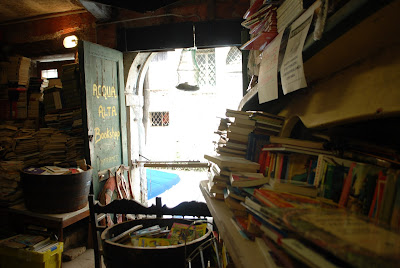 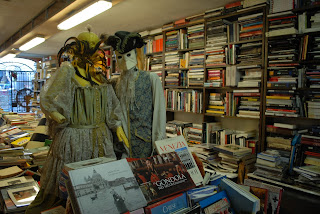 We left Venice early on Friday morning and spent the day driving onto Austria and Vienna for yet another day looking around and dealing with yet another challenge.

Vienna is a large, sprawling city and too big to just wander around so we took a hop on hop off but tour which allowed us to see more of the city than if we were on foot.  There is some spectacular architecture which after a while feels a little samey but then you come across something quite special.  We can't remember the names of all the places we saw but here are some pictures taken while walking through central Vienna. 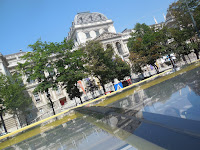 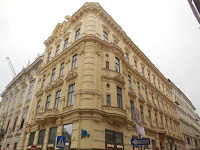 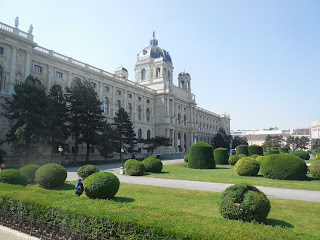 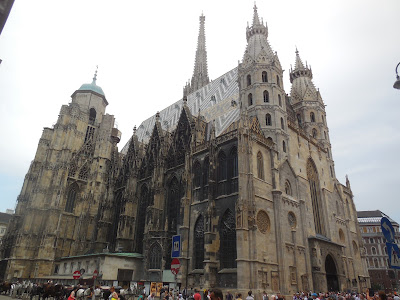 Rachel's fourth challenge was to visit Hundertwasserhaus.  At first we were a little daunted as we couldn't seem to find this on a map but as luck would have it the Hop-on-Hop Off Bus tour went there (yay!!).  We got off the bus to be confronted by this amazing building but on further investigation we found that this wasn't actually Hundertwasserhaus but the museum.  Which also had some spectacular toilets! 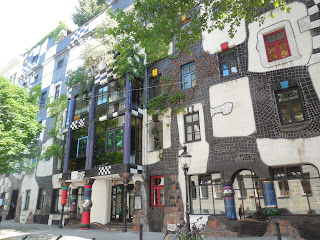 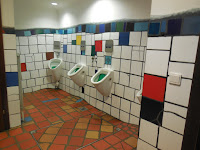 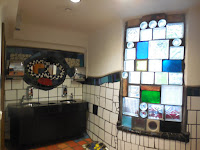 After discovering we had not actually completed the challenge we walked around a little and came across the proper place.  This is the most amazing building and quite something to see. 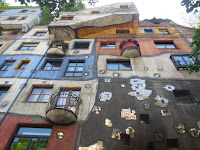 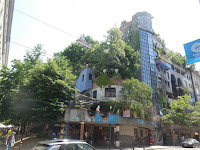 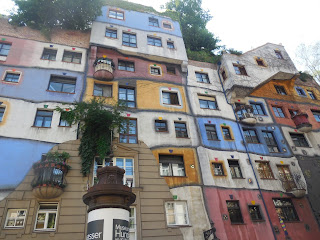 As we made away back to our hotel we came across a chap on his trike with his dog in the back.  I felt we had to share this with you as if you look closely you'll see the dog has his own pair of goggles!! 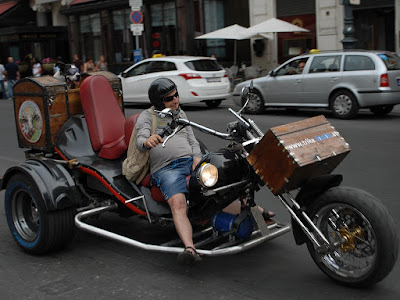 Anyway week one is over and Sarah and I are looking forward to the next stage of our journey so I will post again in Istanbul.  Until then you can keep tabs on us through our spot tracker link.
at 18:47