I think I may have mentioned in an earlier post that my trip from the UK to Mongolia and back will be to raise money for charity.  I'm hoping to raise at least £15,000 and so really need to start getting out there and raise awareness so when the time comes to get people to donate they'll know about the trip and what I'm trying to do.

To that end I've started drumming up support by starting a facebook group which is open to everyone and can be accessed even if you don't belong to facebook (at least that's what I've been told).  I can also be followed on Google+.  My blog will have updates of major activity in the preparation for the trip as well as updates during the trip itself.

I've started by making a card to display when Albert and I go to rallies as well as some business cards to hand out in addition to a poster to distribute locally.  I'm also thinking about a car magnet with some details on it thereby advertising the trip while driving around. 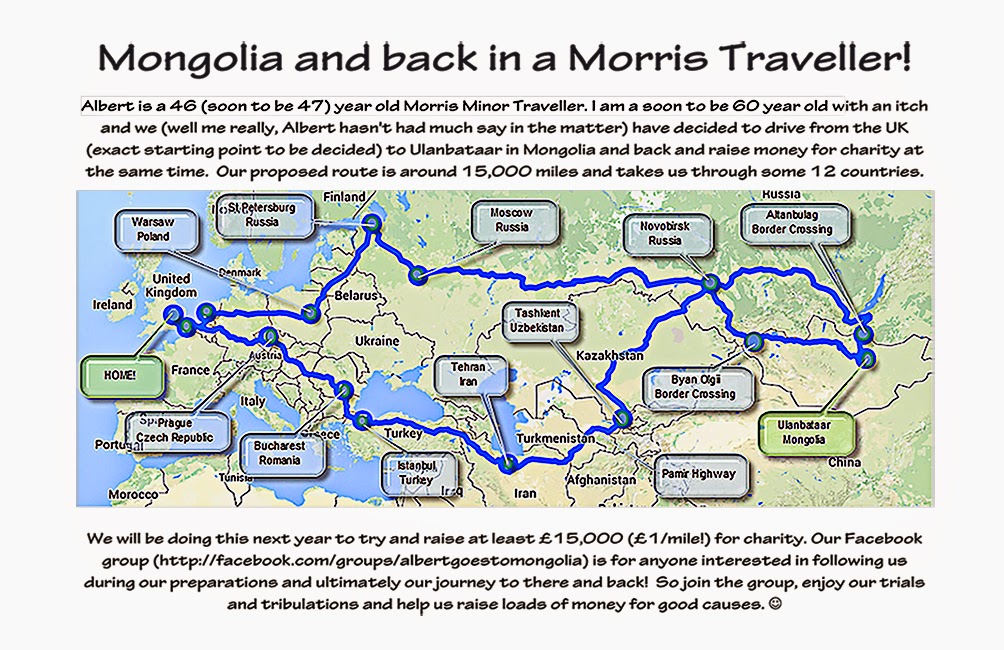 I'm also trying to get some corporate sponsorship to help cover the cost of some of the work that needs to be done to prepare Albert as well as some support towards costs (e.g. petrol) while on the trip itself.  At the moment I'm working out exactly what work needs doing and who I may approach for sponsorship.  I'll also display their names on Albert for the duration so hopefully will be good advertising and they'll go for it.  Will let you know how I get on.

I'd appreciate if everyone that is following me on either the blog, Facebook or Google+ tells as many people as they know about my forthcoming adventure and ask them to support me in reaching my fundraising total.  If anyone has a preferred charity then please go to http://facebook.com/groups/albertgoestomongolia and vote for the charities I should support.  I'll be making a decision and letting everyone know how to donate by the end of the year.  In the meantime I hope you enjoy following my preparations.
at 18:18