Our original route took us through Iran and into Turkmenistan and from there Uzbekistan and onwards to Mongolia through the other Stans and returning through Russia.  For a variety of reasons (all speculative as the real reason is unknown) we did not get the authorisation code for Iran and so we needed to decide on a different route.

We got an Azerbaijani visa before leaving home as there was always a possibility that we wouldn't get the Iranian code.  But the problem we had with this option was we would need to spend time doing other 'stuff' as the Turkmenistan Letter of Invitation (LOI) was for 29th July as we had intended spending 20 days exploring Iran.  Our Uzbekistan visa also was based on going through Iran so our timings were seriously affected through the loss of the Iran leg of our route.

Whilst in Turkey we looked at alternative options one of which was to enter Russia then go through Kazakhstan to Uzbekistan.  While in Istanbul we went to the Kazakhstan Embassy and managed to change our single entry visa for a multiple entry one which ensured we had the alternate route available.  We decided to delay making the final decision on our route until we reached Tbilisi since this was the common start point for either route.

After some consideration of the two options and the date constraints we decided to drive into Russia and through Kazakhstan to Uzbekistan mainly because we would need to wait until the 29th July before being able to cross into Turkmenistan and no matter how we looked at it we couldn't find anything to do for 10 days once we arrived in Azerbaijan or even 10 days in Georgia to be honest. So, decision made and Russia it is.

The following chart is an update of the original one posted and gives our starting place and destination with the approximate distance between places.  The date is when we leave wherever it is we are at. (includes updates on our travels to date).

The route is around 18,720 miles and goes through 23 countries (a few more than once) and is nearly three quarters of the way around the globe!  The green bit is what we have done at the time of the update (15th July 2015) 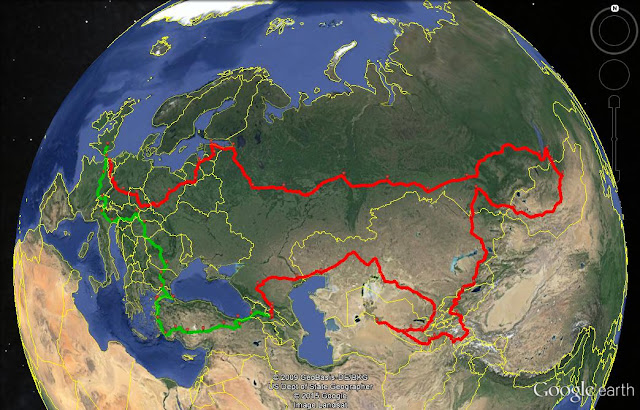