Sarah felt that my summary of the route as; south to Iran, turn left and when you get to Russia Mongolia is on the right was a little too vague especially as she was going to be navigating (can't see the problem myself).

So bearing in mind that we also wanted was to make sure we take advantage of the trip to see as much as we can, and that we need to have dates for some of the visas, we really do need some idea of when we are going to be crossing into places such as Iran, Russia and of course Mongolia as well as places in between where visas are needed.

We decided that the easiest way to work this out was to knock up a list of things we wanted to do and places we would like to visit and then work out distances and how long we think it is going to take to get from A to B and from that when we intend to cross certain borders.  Our route is based around; 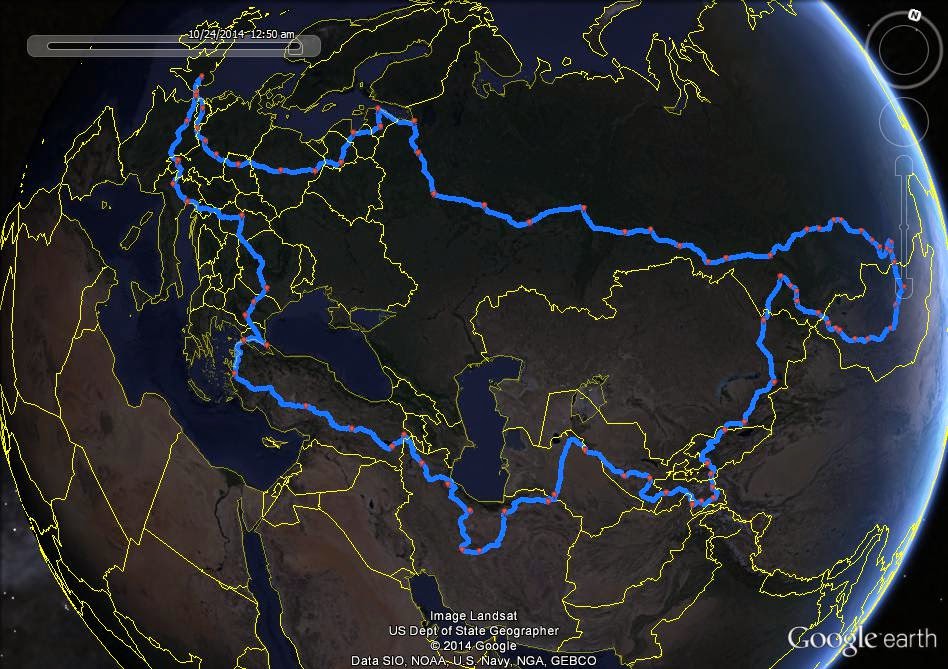 Our final route now crosses 23 countries (France and Russia are visited twice so is that really 25?), 5 mountain ranges (possibly 6), 3 deserts and covers around 18,250 miles.

We have been conservative in estimating how fast Albert's going to be (average 40 mph) and so looks like the whole round trip is going to involve around 100 driving days but we are intending to take some time looking around the places we visit and so the whole trip is now estimated to take around 133 days which is the best part of 4 months.

If we leave mid-July and join the Mongol Rally, as originally planned, we won't get to Ulanbataar until mid-October (well after rally finish line has closed) and we then don't get home until the beginning of December which means Russia at the start of winter and that could mean dodgy road conditions.

Leaving at the beginning of June means we get the best weather (hopefully) for most of the journey and getting back into Russia at the start of autumn which with the changing of seasons should be a great time to visit Moscow and St Petersburg on the way home.

So, that's decided then we are leaving on Saturday the 6th of June 2015.  Now all we need to do is get Albert ready, sort out visas, work out what we need to take and then just do it!