Well dear reader it has been a couple of weeks since I last updated you with progress on our adventure and much has happened since I last left you reading about Vienna.  After leaving Vienna we drove to Budapest in Hungary and spent a day looking around and once again managed to complete the challenge set by our daughter Rachel.

The memorial to the Jews murdered on the banks of the Danube is poignant because of its simplicity.  Shoes from different types of people from all walks of life simply left discarded and pointing to the Danube.  Budapest was a great city to see and we enjoyed our time there.


From Budapest to Bucharest in Romania via a small town called Deva.  We found this Bucharest a 'sad' place.  I can't really explain it but people seemed to be 'serious' there was no buzz to speak of.  people were polite and helpful but the overall atmosphere was just 'sad'.  Also we couldn't find anywhere to buy postcards which was really odd.

Rachel's challenge for us was to get a photo of the street sign for Calea Victoriai with a local.  Not too hard but given this was supposed to be the city's most famous street it was a bit of a let down. The architecture around the city was impressive as with the everywhere else we went although there was more sign of deterioration here. 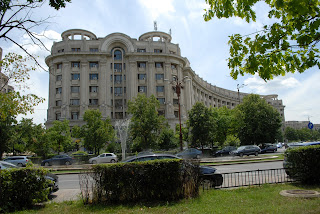 So onwards towards Istanbul and Bulgaria.  This was our second camping experience.  We stayed at Camping Veliko Tarnova which is situated around 10 miles outside of Veliko Tarnova in a small village called Dragizhevo.  I'd met Nick and Nicky when I was travelling overland to Australia and decided that we would stay here again.

While in Bulgaria we intended to visit our first SOS Children's Village and deliver one of the parcels of clothing donated by people in Potton.  It was now that the first curve ball of our trip was thrown.  As we were driving to the village in Tryvania Albert started making some strange sounds and there was some severe vibrations so we abandoned our outing and returned to the campsite.  It was just as well as the mechanic Nick introduced us to diagnosed a failed universal joint.

Repairing Albert meant we spent 4 days at the campsite.  The Sunday was spent doing nothing much as it chucked it down all day and night however the next day was nice so we took a taxi into Veliko Tarnova proper.  This was the old capital of Bulgaria before Sofia.  This is a lovely city and we enjoyed looking around although of all Rachel's challenges this seemed to be the hardest as Google was no help at all.  But as ever the intrepid duo succeeded! 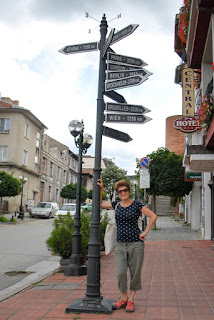 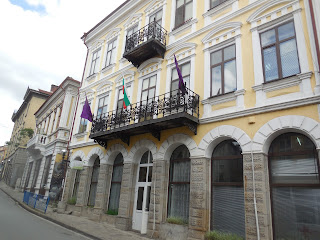 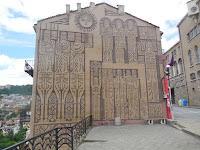 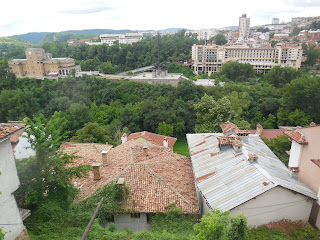 Unfortunately the time taken to repair Albert and the lateness in the day when he was returned meant we couldn't visit the Children's Village which was a little disappointing but we will be visiting others later in the trip.  We spoke to Nick who introduced us to the Mayor of the village and we donated the clothes we collected to the village children.  Nick will send us photos when the Mayor distributes them. 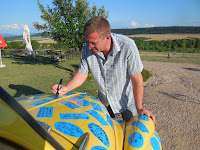 We said goodbye to Nick and Bulgaria resuming our journey to Turkey and Istanbul a couple of days behind schedule losing the 2 days we had previously gained.  After crossing the border we stopped at Edirne for the night a rather nice little town which seemed to be full of tourists.  The next day saw us leave town and reach Istanbul after a relatively easy drive on the motorway.  Once we reached the city finding our hotel was altogether a different kettle of fish with narrow cobbled streets and no real signs we went around a couple of times before successfully finding our hotel.


Rachel's challenge for us here was to take a photo of Sarah and I on either side of the bridge (that is one of us in Asia and the other in Europe.  Not as easy as it sounds given that there are no pedestrians allowed on the bridge and as it is a motorway you can's get stop to take photos either. Our solution to this was take a cruise down the Bosphorus which passed under the bridge both going up river and when returning to Istanbul this meant we could meet the challenge taking a photo of us on the port side of the boat.

Istanbul is a diverse mix of old with the new.  We are staying in the old town quite near to the Blue Mosque but Istanbul sprawls over a huge area and spans both Asia and Europe which is why it is known as the gateway to Asia. 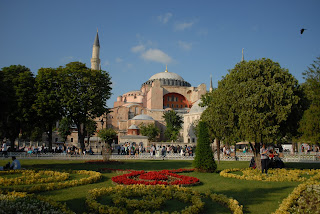 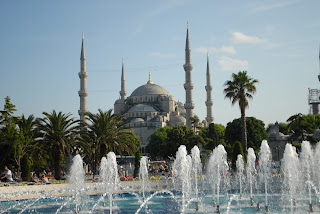 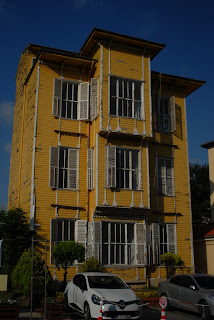 Whilst in Istanbul we managed to get our Kazakhstan visa changed to a multiple entry one which will allow us to re-plan our route as our Iranian authorisation was not granted.  We leave Europe for Asia soon and so begin the second stage of our adventure.  We don't know what sort of access to the Internet we will have and so will post as and when we can.
at 21:20