So dear reader apologies seem to be de rigour for my blog so as not to disappoint I apologise for not posting until we have actually reached Blighty.  We aren't home yet but are getting acclimatised to not being on the road.

As you may recall we left St Petersburg and re-entered Europe crossing into Estonia and now our journey home was simplified as there were no more passport and customs control to deal with so we were not going to be faced with hours waiting to be 'processed'.

Anyway we left an overcast St Petersburg to arrive in a sunny but cold Tallinn, Estonia.  Tallinn is a lovely city and Sarah and I had a great day wandering around the old town weather was fantastic if a little nippy.. We would recommend this as a great place for a weekend city break. Relaxed atmosphere, loads of restaurants and happening places.

Another beautiful day arrived as we drove to Poland and Warsaw. Once again we were in a city that has nothing really old in it. Following the Warsaw uprising in 1944 Hitler razed over 80% of the city to the ground and so very little of original Warsaw (especially the Old Town) remains.

Warsaw Old Town was reconstructed using paintings and the rest of the town was basically built over 60 odd years on the ruins of Warsaw. The Stalin Skyscraper started in 1951 and finished in 1955 was supposed to be a symbol of hope for the Poles but I suspect that given the fact they were effectively under Soviet control until 1989 made this a hollow gesture. The building is now a cultural museum and hosts a cinema, theatre and exhibition halls.

Warsaw Old Town was mainly reconstructed between 1945 and the 1960s but some buildings such as the Royal Castle were only completed in 1984. One thing we have noticed is that from Tallinn to Warsaw the story is much the same and there is very little old about the Old Towns. That said, they are still very beautiful and well worth a visit.
From St Petersburg to Warsaw we had 9 or 10 days of fantastic weather and I suppose it had to end sometime frown emoticon We arrived in Krakow and it was cold and overcast. Talk about extremes. One day beautiful clear skies then next Snow. 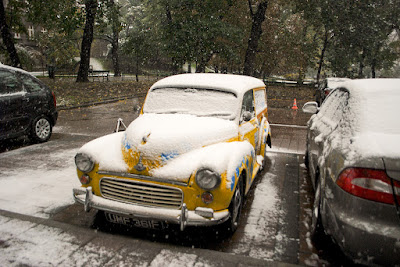 We braved the foul weather and walked around and unlike the Baltic cities and Warsaw, Krakow wasn't destroyed in the war. It suffered some damage, naturally, but for the most part the city remains now as it was then. We visited Schindler's factory and the exhibition was really interesting although it was difficult to spend much time looking around as on Mondays entrance is free so there were so many people there that they were controlling how many could enter at any one time.

Unfortunately our plans to visit the castle state and private rooms and some of the other museums was scuppered by the fact that on Mondays the museums are closed frown emoticon Also unlike previous cities we didn't take a walking tour as it was both cold and wet so we just had a quick meander around the old town.
On our way to Prague from Krakow we visited Auschwitz. I suppose everyone has a view on the Holocaust either gained through films such as Schinder's List, The Odessa File, The Boy in the Striped Pyjamas and many more. But actually visiting the site synonymous with the atrocities of the Holocaust is sobering indeed. 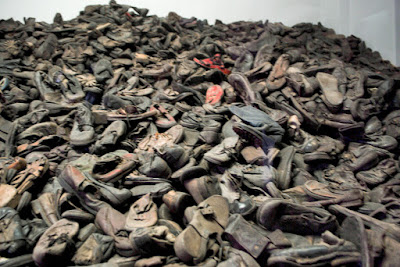 For me, personally, the most disturbing thing was when Sarah discovered the names of twenty three Givertz's in the Book of Names which is a list of Jews known to have been murdered in the Holocaust. All of these could have been a family member. I'll never really know as my Great Grandfather came to the UK at the end of the 19th Century and as my Grandfather and Father have now passed on there is no one on my Dad's side of the family to ask.
Both Sarah and I were moved by the exhibits and the stories told of the exterminations of not only Jews but of other ethnic minorities such as Romanies as well as Poles and Soviets who were also sent to Auschwitz.
It is impossible to convey what we felt but I would say if you ever visit Poland make time to visit this place and consider what man's inhumanity to man can do.

We left Auschwitz with the weather reflecting our sombre mood and reached Prague later that day with no improvement in the weather so a cold, damp and overcast day was spent briefly looking around Prague. I suppose it is better than snow but only marginally.
Prague is an interesting city and, like Krakow, has that old feel about it which I guess is due to the fact that most of the city survived the war. There are lots of new buildings interspersed with the old which gives Prague a very cosmopolitan feel whilst having a primarily 'old' look. 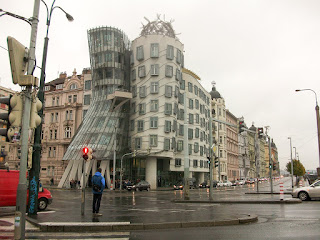 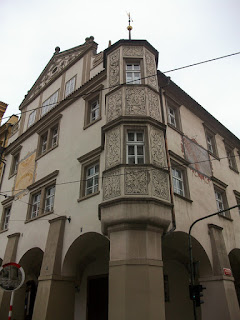 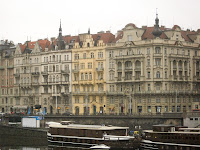 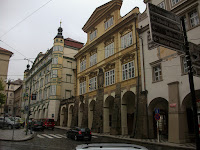 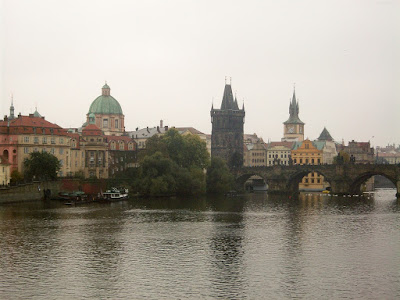 We looked out a number of statues by David Černý who is a well known Czech artist who gained notoriety with some of his earlier pieces. His most impressive piece is called metamorphosis and is a bust of Kafka that revolves his irreverence is further demonstrated by the statue entitled 'Piss' inside the courtyard of the Kafka museum. 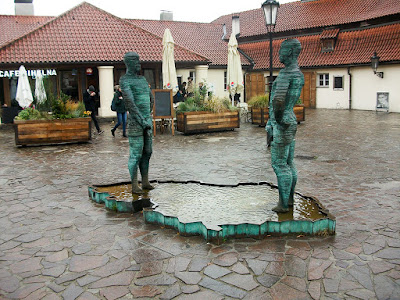 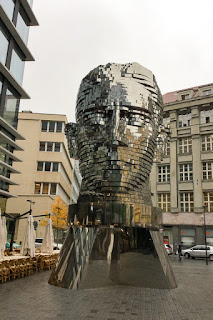 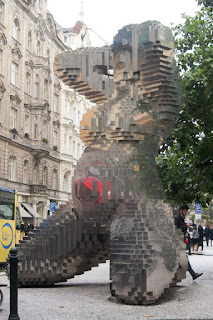 Video of Metamorphosis in action

There's lots to see and do in Prague and a day is probably enough in bad weather but not enough when the weather is fine and wandering around is more pleasant.

Like Moscow, Prague has a festival of light which started on the same day we were there so Sarah and I wandered around to have a look. Problem was that the installations were spread all around and there was no signage so we only discovered a few of these. Some were interactive and a little odd to say the least.  The Festival is still in its infancy so wasn't as 'slick' as Moscow's.

We left Prague to head for Germany and the capital Berlin.  It was a cold and overcast day in Berlin but the saving grace was it wasn't raining. Berlin is a huge city so simply walking around wasn't going to work so we used the U-Bahn (underground to you and me) to get around. Once again Sarah-Nav worked as well on the underground as the overground. 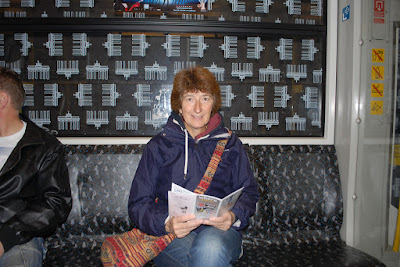 Unlike many of the other capital cities we have visited Berlin's must see and do centres on the wall so we visited the various memorials and of course Checkpoint Charlie where the irony of a Mac Donalds being close by was not lost on me or Sarah. 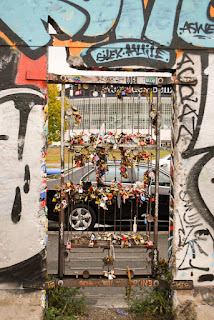 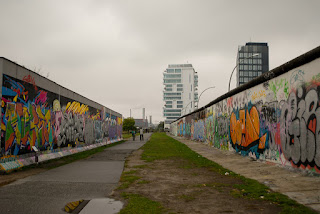 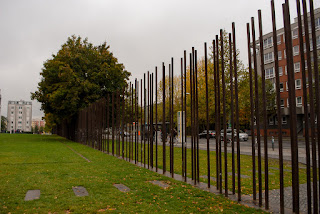 There is a huge amount of building work going on around Unter den Linden so it was hard to get the full grandeur of the buildings and the main street itself. One of the most impressive pieces of reconstructive work being undertaken is that of the Palace. 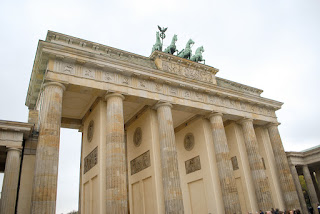 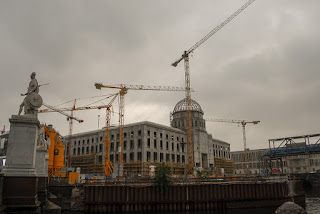 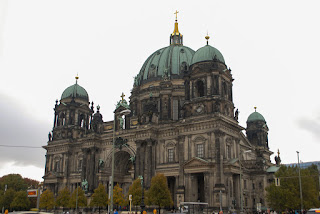 To be honest Berlin did little for me and Sarah beyond the wall and the various memorials detailing its history. It seems to be 'just another city' which suffers from graffiti a lot although some of the street art is impressive.

As you may have gathered, dear reader, Albert has been suffering somewhat and more so after his last bout of surgery in Moscow.  As we have travelled through the Baltics and the various countries on our way to Germany Minor issues (pun intended) have been getting worse so we have  decided not to take the risk of any unnecessary stops so drove directly from Berlin to Calais and then home.

We have decided that we will go to  Luxembourg and Paris at a later date to make up for missing it this time around.
at 13:34